Effective horror feeds your existential fears and leaves you looking over your shoulder when you’re alone. The Red Mother (2020) brings this kind of horror. Written by Jeremy Haun and illustrated by Danny Luckert, issues one through four were originally released in 2019 and are combined as chapters in the 2020 graphic novel. The story sinks into your blood and makes you ask questions you’d rather not consider. Are evil things we can’t see lurking in the shadows? When you’re alone, is that mysterious presence looming in the corner of your eye imagined…or something else?

While reading The Red Mother, I became briefly waylaid by the concept of vision. That we can “see” things at all is weird at best, and deeply unsettling when you think about the mechanics. Our eyes serve as a filter for the world around us, sending abstract signals for our brain to interpret in ways that may or may not be reliable. Putting it in this context, it’s easier to understand why a person who experiences hallucinations would struggle to differentiate between what is “real” and what is a projection from our minds. The Red Mother brings a more sinister meaning to this question.

Daisy is a young puzzle maker who likes traveling and naps. She has been adrift after the sale of her company, but finds fulfillment in her relationship with an artist named Luke. The story starts with the walk home after their date at a local pizza joint.

Or rather, that’s when the narrative starts. The comic book begins with four panels colored crimson, depicting a woman’s desiccated corpse, floating at the center of a crumbling archway. Both eyes are missing, but her right eye socket appears to be disintegrating. A creepy beginning to a story that quickly switches to a mundane night out between lovers.

While returning from the pizza place, Luke is suddenly distracted by an open wrought iron gate leading to a shadowed apartment building. It’s the city, so approaching any shadowy threshold is never a good idea, but Luke walks toward the gate as if called by an unseen person on the other side. He mutters something about “mother”, and then he’s gone.

Daisy awakes in a hospital bed after the violent aftermath of Luke’s disappearance. In addition to losing her boyfriend, she’s lost her right eye. Over the course of the first chapter, Daisy grapples with grief and confusion. She’s frustrated by the detectives’ lack of answers and unspoken suspicion that Luke was mugged or simply left her.

She struggles with the absence of her eye and true love over the course of the story, seeking guidance from a counselor and solace with her best friend and co-worker, Pari. Interesting visual cues begin showing up early on, including a stone slab on the therapist’s bookshelf that depicts a Celtic triskele symbol, which holds significance both to the story itself, and to myths the comic seems to reference.

Mythology is filled with eye imagery. Crows and ravens pecked at the eyes of fallen soldiers to transport their souls to the afterlife. Odin sacrificed his eye to gain magical wisdom, and the dreadful Balor of Ireland had an eye that could strike men down in battle. In more recent history, a 2008 film called The Eye bares a few parallels to The Red Mother–namely, the protagonist receives an eye transplant and begins seeing visions of terrifying entities.

While Daisy doesn’t receive a transplant of an actual human eye, she does have a more common procedure that includes a ball implant to fill out the missing space, and a painted glass eye that can move in sync with the existing eye but–importantly–not see.

Despite her missing vision, however, Daisy begins to see things that aren’t there. At first it’s only the color red falling over her sight, like a colored lens on a projector. It’s easily enough explained as a symptom of Charles Bonnet syndrome, which afflicts many people with vision loss. But after a meeting with her counselor, Daisy is struck with crimson in the middle of a crowded city sidewalk and sees something truly horrifying: an immensely tall, shadowy figure with broad, cheshire-cat grin coming straight toward her. 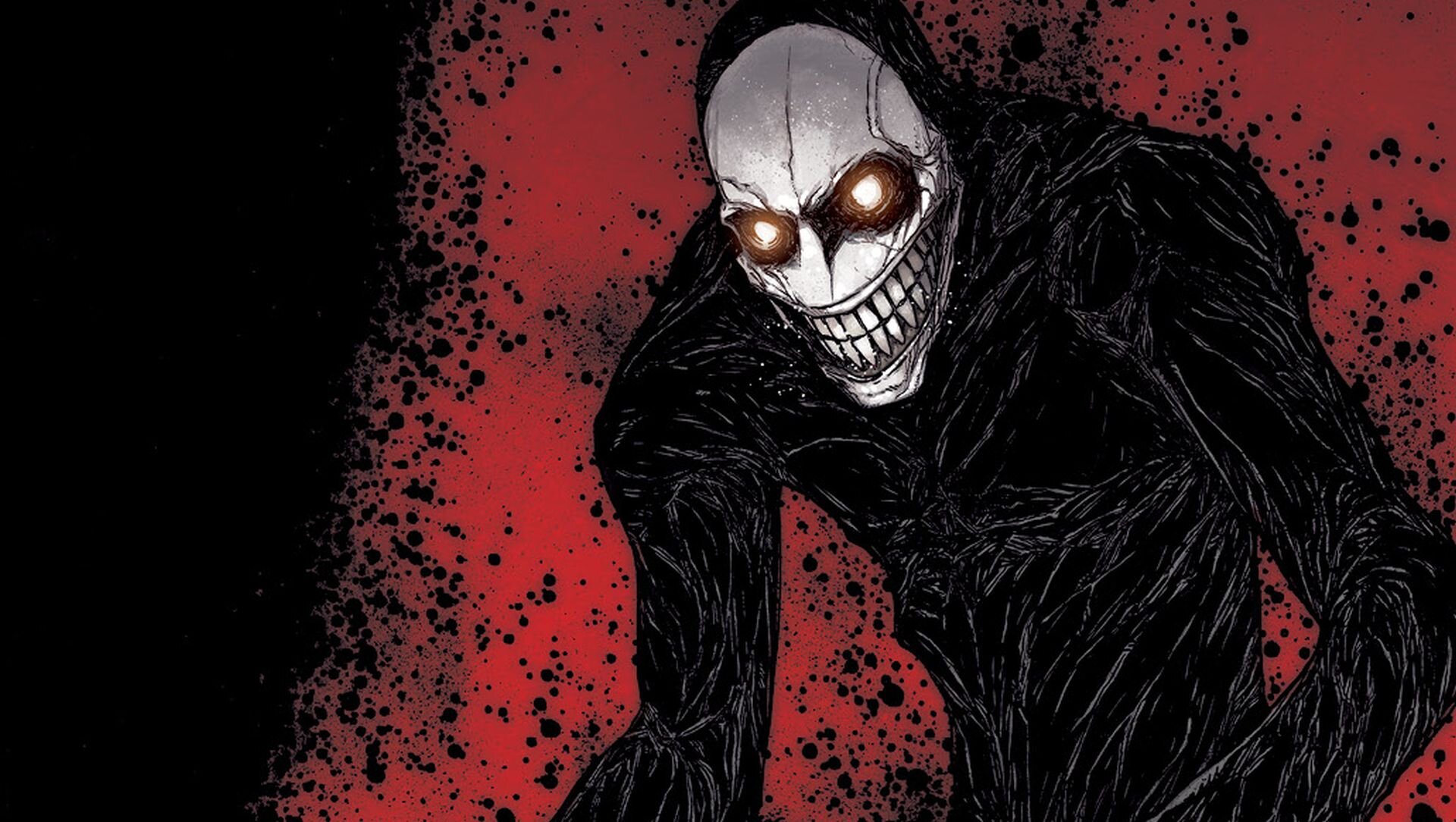 The rest of volume one follows Daisy’s attempts to logically explain her panic and public-outburst-inducing visions. She asks doctors and Pari, web searches Charles Bonnet syndrome, and for a while settles on the theory that her hallucinations are brought on by moments where she’s experiencing intense emotions or life changes. In some horror stories this might be the real answer, but in The Red Mother, it’s anything but.  Daisy’s rapid descent into terror is escalated when a stranger asks if she can see “Mother”, leading her to the awful conclusion that she is not, in fact, having hallucinations.

This graphic novel takes a normal girl with simple desires and transforms her life into a living nightmare. She is relatable and sympathetic, which amplifies the disturbing thought that horrible things can happen to anyone, from the loss of a loved one, to the loss of a body part, and the subsequent introduction to a world where ghouls exist.

I’m looking forward to reading volumes two and three and seeing where the story goes. Thankfully the comic has been going for a couple of years now, so I won’t have to wait until the next part of the story. Because let me tell you, the cliff-hanger ending is bone chilling–equal parts creepy pasta, fairy tale horror, and illuminati death cult.

I’ll be reporting back soon with my thoughts on Daisy’s journey. Until then, don’t look too closely at shadows, and don’t walk through gates when you can’t see the other side.